An Interfaith Dialogue on Guns in America 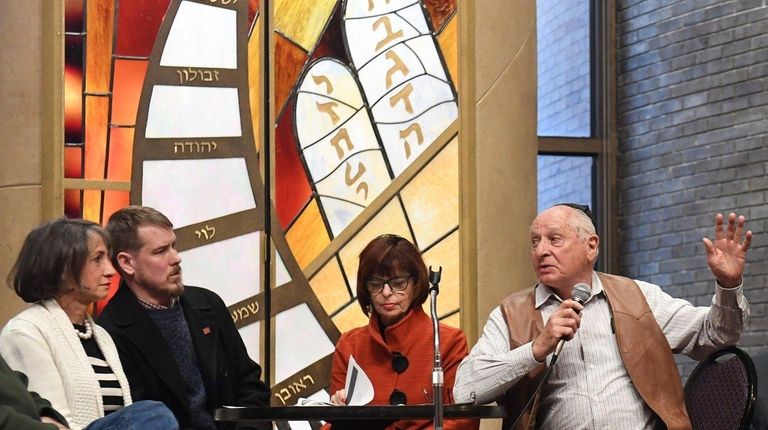 Vivian Viloria Fisher, (from left) Jeff Keister, Marcey Wagner and Burt Benowitz discuss ways to curb gun violence Sunday in Port Jefferson Station. Photo Credit: Newsday / Thomas A. Ferrara
By Rachelle Blidnerrachelle.blidner@newsday.com   @rachelleblidner Updated March 4, 2018 9:13 PM
An interfaith group of clergy members joined Sunday in Port Jefferson Station to call for more gun control measures after the recent Florida school shooting.
Leaders of Muslim, Jewish, Universalist, and other congregations on Long Island urged people of all faiths to work together to reduce the frequency of mass shootings after 17 people were killed in Parkland, Florida, last month.
“I have to believe we do make a difference today,” the Rev. Gregory Leonard, of Setauket’s Bethel African Methodist Episcopal Church, said at the North Shore Jewish Center. “It may be small, but it can add up to something larger.”
Several speakers noted that many religious texts call for weapons to be used sparingly and only in self-defense. They expressed frustration with a culture that seems to value personal freedoms over “the common good,” stalling gun control efforts.
“Every moment that has passed since Columbine is an assault on the inherent worth and dignity of the people who have been sacrificed in our delay in acting,” said the Rev. Margie Allen, of the Unitarian Universalist Fellowship at Stony Brook, referencing the 1999 shooting at Columbine High School in Colorado.
Several speakers called for a multifaceted approach, including addressing mental health issues, reducing violence in movies and video games and voting for pro-gun control public officials.
Dr. Yousuf Syed, a trustee of the Islamic Association of Long Island in Selden, said school shootings have “become a norm,” showing that people have to find a way to keep guns out of the wrong hands.
“These are issues we have to think about very seriously and jointly,” he said. “A gun in itself is not harmful. It is the behavior of man that is responsible.”

Burt Benowitz, owner of Benson’s Guns in Coram, said that when he started his business 45 years ago, local high schools had rifle teams and allowed students to bring their rifles on the school bus in carrying cases.
“There was never an incident. What happened that things have changed?” he said.
The Rev. Chuck Van Houten, of the Stony Brook Community Church, said he briefly considered carrying a concealed weapon to protect his congregation after reading about a mass shooting in a Texas church, referring to the killings in Sutherland Springs last November. He decided against it.
“I would need to live my life in such a way that it’s an example in my faith in God,” he said.

Popular posts from this blog

June 10, 2020
My mind has been thinking about time and how it seems to be different now with all of what is happening. First there is COVID-19 and our stay-in-place semi-lockdown.  For those who have full-time jobs, and even for those who don't, we schedule things around moments in time.  Our lives are routine-based:  when we get up, when we eat, when we work, when we have time for family, when we have time to ourselves, when we sleep, etc.  When our routines are disrupted, many of us feel out of sorts or even lost.  What happened?  Why is this happening?  When is it (routine) coming back?  I've heard that there are many Americans who find it difficult to take a vacation, a real vacation of a week or two, because it takes them away from their work for too long.  As we are gradually allowed to come back to our former lives before COVID-19, perhaps we will have a better sense of time, our old time.  But then again, maybe time will never be the same.      George Floyd was killed senselessly an
Post a Comment
Read more

Make even these days count

May 13, 2020
One of the most popular features on a local newscast of a small TV station is something rather surprising. It is a feature called- “The Day of the Week”.  Today is…….. Monday!  The station put forth this as a kind of joke at first, but it was so popular that it became a regular daily addition to the morning newscast.  Apparently, so many of us have lost track of what day it is that we need a reminder. During this stay-at-home time, every day seems to blend into the next.  It is truly difficult to remember how many days we have all been quarantined at home, what the date is and what day of the week it is.  Many of us have a few markers that help- jobs that pause for the weekend, celebrations of Fridays, Saturdays or Sundays- special days of worship.  But even with these, the days seem to bleed into each other like a striped shirt washed in hot water. The period that we are in right now in the Jewish calendar is ironically, a time of counting. A time when we purposely try to keep
Post a Comment
Read more
May 05, 2020
I did not want to write about this virus-time. I did not think I could.  Another piece was in my mind this week, not quite yet taking shape. But when I sat to write, the virus took my attention and I could not wrest it back.   There are useful and funny memes online, and stories of good will and good works, and words of inspiration and comfort. And terrible stories, too.  Mostly at a distance, we have been sharing dance and art and music, facts and opinions, cautionary tales and fairy tales. We miss hugs and doing projects and working and learning together in person. Sometimes we are in a bubble for a while that lets us just be, free of anxiety or fear.  Sometimes we cannot get out of bed.  Sometimes we cannot sleep.  Sometimes we eat all the chocolate and sometimes we eat nothing.  We who are privileged live like this.  We are grateful to the people who work at the jobs we need to have done even in the face of the danger and I believe we do not understand a fraction o
Post a Comment
Read more